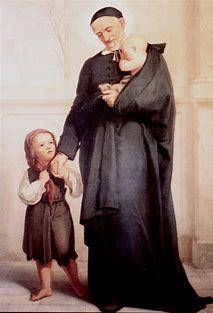 Can you imagine being captured by pirates, and then taken into slavery? That’s just what happened to St. Vincent de Paul.

St. Vincent was born in Ranquine, France, the son of a peasant farmer. He was able to study and become a priest in 1600. He was traveling by sea when Barbary pirates captured him; he survived two hard years as a slave, but escaped to Rome and later, Paris. It was there that he met Cardinal Pierre de Berulle, who influenced Vincent to devote his life to charitable works.

He established organizations of men and women to provide aid to the poor and sick. He depended on the donations of the wealthy, who made it possible for him to found hospitals and an orphanage.

In 1625, in Paris, Vincent founded the Congregation of the Missions, called the Lazarites or Vincentians, a society of priests charged with missionary efforts, the training of clergy, and preaching among the country people. In 1633, with St. Louise de Marillac, he founded the Sisters of Charity, the first congregation of women to care for the sick and poor outside of the convent. During Vincent’s life, the Vincentians increased in number and spread across the world.

His feast day is September 27.

Unfortunately not the ones with chocolate chips.

Some cookies are necessary in order to make this website function correctly. These are set by default and whilst you can block or delete them by changing your browser settings, some functionality such as being able to log in to the website will not work if you do this. The necessary cookies set on this website are as follows:

Cookies that are not necessary to make the website work, but which enable additional functionality, can also be set. By default these cookies are disabled, but you can choose to enable them below: